You Can “#BeThe1To Prevent Suicide”: A National Call to Action

Dr. John Draper is one of the nation’s leading experts in crisis contact center practices (hotline, online chat, SMS services, etc.). As Project Director, he oversees all aspects of the federally-funded National Suicide Prevention Lifeline network, which consists of over 160 member crisis centers across the country. 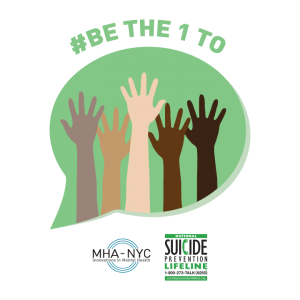 Is it possible to reduce suicide like we have reduced other major causes of death, like deaths from heart disease and heart attacks? And, if so, is there something we can all do in our communities to prevent a person from killing him or herself? “Yes!” would be the response of members of the National Action Alliance for Suicide Prevention and the National Suicide Prevention Lifeline. The “#BeThe1To” campaign, first conceived by the Lifeline in 2015 and now expanding to reach more people, is designed to illustrate ways people are keeping themselves and others safe from suicide, while informing the public as to how we can all act to prevent suicide.

Until about fifty years ago, we believed there was nothing we could do for people having a heart attack until they got to a hospital. However, most heart attack victims delivered to hospitals were dead on arrival. In 1966, a Belfast physician named Frank Partridge started a program to bring cardiac intervention services into the community by establishing the first mobile coronary care unit. Leonard Cobb, a cardiologist in Seattle, was inspired by Partridge’s insight into a “tiered” emergency response system, whereby persons at the scene could provide care until a mobile unit arrived. Subsequently, Cobb created the first CPR training program for firefighters, then applied a shortened CPR program for citizens in Seattle. Today, U.S. deaths from heart disease have declined by 75% since the 1960’s, with data suggesting that at least half of this decline can be attributed to people reducing the risk factors in their lives.

Heart disease and heart attacks are not only the business of doctors; we now know that preventing these causes of death can effectively be our business, too…if we know what to do. There is evidence all around us indicating suicides are being prevented outside of hospitals, clinics and doctor’s offices. Following the recent CDC report this April showing suicide rates increasing in the United States in 2014, the Action Alliance’s media response included this statement:

The CDC data remind us that there is more we must all do to prevent suicide in our communities. However, it is important to be aware of data that indicates suicide prevention is effectively occurring daily, in ways that are rarely finding headlines. For every one person who tragically dies by suicide in the U.S., there are approximately 278 people who have serious thoughts about killing themselves, and nearly 60 who have survived a suicide attempt, the overwhelming majority of whom will go on to live out their lives. These untold stories of hope and recovery are the stories of suicide prevention, stories which are informing the Action Alliance’s efforts to prevent more suicides every day.

A majority of individuals who get through suicidal periods are doing so with support and coping skills most readily available to them in their lives. In one 2009 study, participants with lived experience of suicidality listed coping techniques where “getting help from a mental health professional” placed fourth, behind (in order) “spirituality/religious practices,” “talking to a companion” and “positive thinking,” and several other self-generated behaviors following getting professional help.

We must continue to provide crisis hotlines and easier pathways to clinical care (ideally evidence-based), but we also need a “tiered approach”—like what was effective in reducing deaths from heart disease and heart attacks—where we can learn to help ourselves, help others, seek consultation from trained providers (hotlines and clinicians) and to seek hospital care when necessary.

Even if your organization has already prepared messaging for Suicide Prevention Awareness Month, you can still be a part of the “#BeThe1To” campaign. This campaign is a flexible public messaging framework that can be used to show how people can take actions to help themselves and others to prevent suicide. Your organization can use the framework to complement your own action-oriented message for suicide prevention. Lifeline has identified five basic steps that people can take to prevent a suicide (from emerging best practices in our field):

You can join us in the #BeThe1To campaign by signing up to participate using our Google form, or by emailing communications@dev-mha-vibrant.pantheonsite.io. Or you can keep an eye out for our new microsite and message kit, both of which will debut on September 1, and will contain messages, stories, and resources for you to share with your networks.