Sarah Vander Schaaff is a writer, blogger and a mother of two from New Jersey, who has struggled with Obsessive-compulsive disorder for as long as she can remember. Her courageous column in the Washington Post (“Obsessive –compulsive disorder nearly ruined her life”, January 4th) received international attention for its honesty and openness. This is the first blog in a regular series for Sarah who will write about the mental health challenges we all face in day to day life.

As I sat in the dark waiting for the Space Mountain roller coaster to get going, I reminded myself that it had been about thirty years since I’d last gone on the ride. Whatever bumps I’d experienced in my life, the overwhelming anxiety and OCD that made it feel like an emotional rollercoaster stuck at full speed ahead, were easier now. I felt steady enough to willingly sit in a little car on a tiny track and head into the darkness of “space”.

Actually, I thanked Zoloft, my therapist, my psychiatrist, my husband, and my kids for a second-chance at fun.

Not so long ago I might have sat out, cautiously assessing the risk of going on a ride that just a half hour earlier had been shutdown due to technical difficulties. I’d have questioned going to Disney World in the first place, given the recent shootings in Orlando, the heartbreaking death of the young boy at the Grand Floridian, and a mounting feeling that the summer was bubbling into hot, unpredictable, chaos.

But the past few years have been a slow and steady process of accepting the chaos of my own mind, one that is predisposed to anxiety and obsessive compulsive thoughts. Zoloft, as my psychiatrist said, is the lifeboat. The rest is learning to keep my head above water.

I decided that a trip to Disney World was something I wanted to enjoy. It would involve flying (which I don’t like) and being in the sun (a trigger for my OCD, in my case, I worry about skin cancer) crowds and crowd-control (can you say panic attack?) and choosing to go to one of the top tourist destinations in the world (target for terrorism).

“I was actually a little surprised you went,” my college friend said this week when we talked about the trip.

The truth was, so was I.

At some point in your life, you almost forget that you’re capable of change. And for me, so much of my personality has been tied up with worry, that I had not even imagined a day that I might be free from it ruling my decisions and emotions.

I’ve worked hard to overcome my fear of flying, which is as much a fear of having a panic attack at the airport as it is of anything else. I’ve done hypnotism with a respected therapist in New York City, years of a Fear of Flying Course run by a former pilot, and I’ve sat in the cockpit of a tiny plane, shaking in the wind even as it was strapped to the pavement, while a very patient amateur pilot and friend walked me through his checklist for safety. 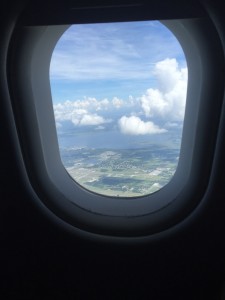 View from the plane

But I’ve also sat in the lobby of the regional airport in Trenton and watched planes take off and land, an act of exposure therapy my therapist assigned to me. How did it feel to drive to the airport, wheel an empty suitcase, and sit there—no ticket in hand and no place to go?

But, in the long run, it made the day of the flight a lot easier. Guided meditation, another thing my therapist recommended, has helped, too. If I get on the plane with a lower level of anxiety, then I can deal with turbulence, or the appearance of smoke filling the cabin, without squeezing my husband’s hand until it turns blue.

“That’s just condensation,” I told my eleven-year-old, as “smoke” did seep into the cabin on the flight home.

As for the sun, I’d just had my annual skin check with my dermatologist. That’s one exam, with one doctor—far from my old habit of serial appointments and second-opinions. I wore a hat and SPF 50. Most women in the Magic Kingdom were wearing mouse-ears. I was far from the most outrageously dressed.

The crowds were bad only twice during the trip. Waiting for a ferry in the hot morning sun, squeezed among hundreds of other tourists and strollers, was annoying. But we were on our way to the Magic Kingdom-who could complain about that?

The line at airport security was another matter. It was a perfect storm: noise, crowds, disorder, and smelly feet. The subliminal message, that this system is the one by which your safety is protected, is the one that always agitated me. This is it? Now I’m worried.

But I wasn’t. Not the way I used to be. It has helped me to recognize my old patterns and see them as habits and not premonitions of disaster. My OCD pals and I like to compare our “catastrophic” thoughts and I think I can keep up with the best of them, but in an airport, I’ve learned to not listen to myself very much.

Worried that the pilot’s hair looks like John Ritter from Three’s Company and you’re doomed? Of course you are, Sarah, now read your magazine. 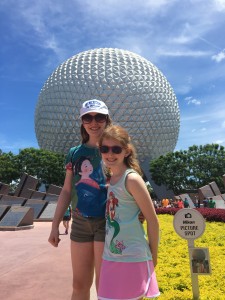 As for Disney, they had metal detectors and searched our bags at each entrance. And we had our fast passes and enjoyed each ride and line, and silly meal. And we did a double-header one night, bedtime be dammed, and rode the safari ride through Animal Kingdom.

The fact that terrorists still found ways to make headlines and dominate the news on the hotel TV confirmed the painful truth that life is beyond our control, in moments of celebration, in places of worship, and in the streets of America.

But in an unexpected way, my personal anxiety has better prepared me for this summer of national anxiety. I don’t mean that I feel protected against the very real and serious dangers of the world. I mean that I’m able to separate my thoughts from what is right in front of me.

Fear is fear. The power it has over you can be all-encompassing. No one else needs to understand it, or believe it, or validate it, or share it for it to have power over your mind and your actions. The same, though, is true in the inverse.

Everyone needs, and deserves, a vacation from anxiety.

I hope you’ll find one, too.

I’d love to hear from you. Please let me know how your summer has been, what challenges you’ve faced, and how you’re coping during this very challenging summer. I can be reached at writeonsarah@dev-mha-vibrant.pantheonsite.io.