Transgender and Finding Her Voice 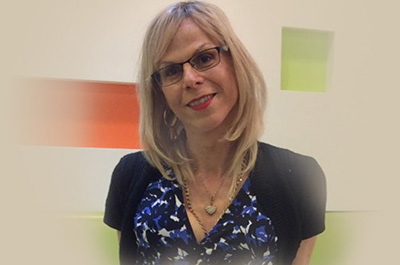 Last week, I was reminded that being open-minded and understanding the depths of another person’s life experience are two very different things. For all the talk about transgender issues in the news today, how many of us have had the opportunity to talk with an individual about his or her experience—not in the political sense—but in relation to everyday emotions, relationships, decisions, and physical and mental wellbeing?

This blog is about the journey of one individual to find her authentic voice, quite literally, as she transitioned from male to female in her late 60’s.

Allison Davis grew up overseas, the child of an American diplomat and British mother. By the time the family settled in the states when she was an adolescent, she knew she had “gender issues” but had no way of understanding them. She assumed she was the only person in the world who felt the way she did. It was shame producing, she said, and felt awful.

“I figured when I got married, it would solve these issues. But it didn’t,” she said when I spoke to her on the phone last week.

There were moments of stress in her marriage when she hid her cross-dressing, got found out, and then promised she would not do it again

“All along my wife would say, ‘Just stop it. Can’t you stop it?’ as if it were an action with no realization that it was an identity.”

With the introduction of the Internet and the communication that it allowed, Allison said she had a revelation. She could finally put her experience in context. And she was able to approach the topic with her wife in a broader way. They read a book about transgender issues and discussed it together.

“It was enlightening for her and for me,” Allison said. It gave them words, when before they only had emotion.

Just before I spoke with Allison, she celebrated her 48th wedding anniversary with her wife. Together they have two adult children and four grandchildren. Like any couple that has stayed together over so many decades, they have had to work hard on their marriage. But unlike most, their challenges have been directly related to gender identity.

“My wife married a man,” Allison said. “And she’s a heterosexual woman.”

For her wife’s sake, Allison presents as a man on the weekends, an act, she says, that makes her feel like an imposter. But it is part of the “safe haven” they’ve established for now. Everything, Allison said with compassion, is a loss for her wife.

To soften those losses, Allison agreed to another compromise. She waited until after she retired in 2015 to fully transition. That day, she said, was one of the happiest days of her life.

But presenting as Allison five days a week now is far different than going out occasionally, as she’d done for close to fifteen years. She has to use her voice. And this brings us to the next layer in Allison’s story.

“When I was first going out, I didn’t talk much,” Allison said. Eventually, when she became more comfortable with the fact that she was transgender, she stopped worrying about what people might think and used her voice, however it sounded.

But now, she says, things are different. She wants her speaking voice to match the way she looks. And she wants the person listening to easily find consistency in her total presentation.

The voice, it turns out, is often the last thing people deal with when transitioning. It is especially daunting for individuals such as Allison who are non-surgically transitioning from male to female. There is not the benefit of hormone therapy. (Testosterone thickens the vocal folks and creates a lower pitch for female to male transitions.)

Allison turned to the NYU Steinhardt’s Speech-Language-Hearing Clinic which offers voice and communication modification services for transgender individuals. Graduate students in the Department of Communicative Sciences and Disorders work with faculty to help individuals one-on-one and in monthly group sessions.

Not every client wants to be perceived as a cisgender male or female, but Allison’s goal was to match her voice to her new identity as a woman. NYU’s program is designed to help clients find the best way of using their voices, reducing strain and long term damage.

Allison worked with a graduate student to increase her pitch, which was moderately low as a male. But finding a higher pitch was not the only adjustment she needed. Part of the quality she wanted to achieve related to resonance, the placement of vibration when producing sound. She learned to do lip drills and tongue drills and pitch glides.

It was hard work.

“We learn to put make up on and it’s an instantaneous result,” she said. Not so with this. “It takes a long time because you’re retraining your voice.”

Allison moved beyond drills and letters and practiced individual phrases. She worked on thanking the bus driver and saying simple but fundamentally important things such as: “Hi. My name is Allison.”

She read passages aloud and learned to increase her volume and find comfort in extemporaneous speaking. This was not about imitation. It was about finding the ability to express herself.

In fact, since her full transition and her comfort with her own voice, Allison says she’s far less inhibited. She’s enrolled in an improv class and follows her interest in clothes and fashion. And she is part of a cross gender organization that meets for dinner once a week.

At the age of 70, Allison Davis has finally found her voice. She believes the younger generation does not have some of the same issues she had growing up a half century ago. But gender identity and sexual orientation are complicated concepts for people to understand in the context of transgender.

And while it has been difficult for Allison and her wife, she knows friends who have transitioned before they’ve found a mate who say it is difficult to find someone who will love them.

Allison was fortunate to find a program through a university that was affordable. Speech services related to transgender voice modification are not covered by insurance, and finding therapists with experience in the field can be difficult. That may change with more programs such as the one she found at NYU, which also offers an online master in speech language pathology, one of the few university programs in the country to offer transgender specific voice therapy.

According to a blog on the school site, 1.4 million adults in the US identify as transgender and, “having a voice that they feel does not correspond with their gender expression and identity can be a source of stress, anxiety, or depression.”

Allison can attest to the fact that finding her own voice has been essential throughout this process. She hopes to motivate others.

“I want to encourage it,” she said.

Perhaps it was fitting that I interviewed Allison over the phone, where the voice is the most powerful element of communication between two people.

After the interview, I had many moments to reflect on our conversation. And I was reminded once again, that talking about our lives and challenges is the surest way to find our common ground.

*If you have not already read the January 2017 Issue of National Geographic on Gender Identity, you may wish to find a copy at your library or read it here.