Members of the National Suicide Prevention Lifeline’s national network are part of a community that encourages the sharing and innovation of best practices in crisis counseling and suicide prevention. This blog post by Chris Maxwell, Lifeline’s Coordinator of Member Engagement, is an example of the kinds of discussions available to crisis  centers in the Lifeline network. Learn more about joining the Lifeline network here.

Shortly after Netflix released Jessica Jones  with critical and fan success in 2015, I found myself plopped on the couch one weekend after binging the entire season. Several months later, after I had finally finished the second season of Netflix’s Daredevil, I started Googling connections between the two characters. Then something interesting happened — after reading article after article and going further into the web wormhole — I came across this piece: a fictional psychological report on Jessica Jones. It was fantastic! And spot on! And woah, is this a thing?

Pop culture and media can allow people across the country and world to connect with a shared icon, story, or idea, and allow them to explore other ideas and feelings through the lens of that shared culture. How people react to media and pop culture in general can say a lot about what they cherish and assign value. Finding out and listening to what people love can lead to lasting trust and connection. A depiction of someone’s favorite character in a movie or other source of pop culture struggling with depression may or may not have a very real impact on someone. There are ways we can build this type of cultural sensitivity into our everyday interactions, and our interactions with callers and chatters on the Lifeline.

The Jedi Counsel (yes, that’s spelled correctly) created the psychological report on Jessica Jones, as well as several other pieces that explore the psychology of pop culture and/or fictional figures, like Diagnosing the Dude from Big Lebowski. The geniuses behind this project (they also host a podcast!) are Katie Gordon, PhD, and Brandon Saxton, MS, both from North Dakota State University. I recently reached out to Brandon and Katie to learn more about them, The Jedi Counsel, and explore how their work intersects with Crisis Centers, suicide prevention, and what we can learn from media and pop culture.

How did Jedi Counsel get started and what is it all about?

We found ourselves having a lot of discussions about two topics we’re deeply passionate about: comics and increasing mental health awareness. At one point, we started reflecting on whether we could engage others about serious topics in psychology by connecting the material to other fun areas they care about in pop culture.

We started off writing blog posts that were designed to look like pseudo-psychological evaluations that provided details about symptoms of mental health problems and relevant evidence-based treatments within the context of details about the fictional character’s life. We started off with a post about one of our favorite characters, Darth Vader. The blog has since branched out to cover several other characters from a variety of mediums and genres. After having a positive response to our posts, we decided to expand to recording a podcast.

Our main goals are to connect with people through our shared interests, and we have enjoyed talking about mental health, sci-fi, comics, and other topics with people all over the world! The podcast is less structured than the blog posts, but usually focuses on one, or a few, specific topics related to mental health as well as discussion of how those topics have been depicted in popular culture. In addition, we have also been fortunate to join the Geek Therapy Network which includes multiple podcasts co-hosted by mental health professionals with nerdy interests as well as connect with many interesting individuals and groups around the world!

Have you learned anything through your work that would be helpful for crisis centers?

We have given talks at functions that tend to draw people who are into nerdy culture (e.g., at a public presentation series called Nerd Nite, at comic conventions), and we find that when we start out by connecting with people about shared pop culture interests, they appear to feel more comfortable opening up about their mental health experiences. It takes some patience to not directly jump into suicide risk assessment and prevention, but we have been impressed by how courageous people are in sharing their stories once we have opened the door by talking about a shared love of things like Batman, Star Wars, or Buffy the Vampire Slayer.

Sometimes it’s easier for people to say, “I feel kind of like Batman does in that part of the movie,” when they can’t find the language or feel uncomfortable talking about how they feel. It’s been eye-opening for us, in some ways. A perfect example of why is our most recent panel presentation. We usually prepare presentation material discussing who we are, what we do, and then a few popular characters and their mental health. However, at the beginning of the talk, we always tell the audience that we want it to be as conversational in nature as they like and we can discuss any characters that they are interested in, not only the ones we come prepared with. This panel started off as usual, with us talking away with our prepared content. However, before we knew it people were jumping in with their favorite characters as well as their own experiences and concerns related to mental health.

It was really cool for us to see how the dialogue about their favorite characters really helped them feel comfortable talking about their own experiences as well as articulating what they had experienced, even in a group of strangers. So, in sum, we would say that using fictional characters or common interests can be an effective way to start discussion, build rapport, and increase comfort.

What resources are available for mental health professionals looking to expand their knowledge of pop and geek culture?

There are two primary resources related to this topic that we think people could really get some use from. The first is Comicspedia. Comicspedia is a database of comic books that was started by Dr. Patrick O’Connor. The database consists of hundreds of summaries of specific comic books. The idea is that therapists can find specific characters, themes, or demographics depicted in comics that might be useful for them to bring into a therapy session.

Another great resource is the Geek Therapy Podcast Network. The network consists of a variety of shows run by mental health professionals from various backgrounds. All the shows have slightly different perspectives, even when covering the same topics. There’s a lot of valuable information in each show. Additionally, Josué Cardona, forerunner of the network, has started building a Geek Therapy Library. The library is meant to serve as a database of nerdy resources from a variety of mediums for therapists to use.

Lastly, and maybe least novel, we would encourage anyone (mental health professional or otherwise) to just embrace whatever nerdy or geeky topics that they most love (not sure if referring to all things nerdy actually counts as a resource, but bear with us). Like Felicia Day said, “The heart of my story is that the world opened up for me once I decided to embrace who I am — unapologetically.” Starting Jedi Counsel was truly our way of embracing some of the things we most strongly nerd out over. And so far, it has been one of the most exciting and rewarding experiences we could have asked for. We’ve gotten to build really cool friendships with folks all over the world by just talking about the things we love.

For more Jedi Counsel podcasts that include suicide prevention themes, check out: 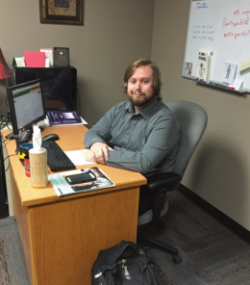 Brandon Saxton, MS, is a fifth-year doctoral student in the clinical psychology program at North Dakota State University.His research primarily focuses on emotional influences of cognition and vulnerability to depression and suicide. He started Jedi Counsel with the hope that it would serve as a means to get people thinking about mental health and the ways it can influence anyone either directly or indirectly. His favorite fictional characters are Batman and the Green Arrow. 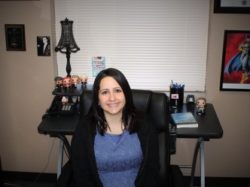 Kathryn Gordon, PhD, is an Associate Professor in the Department of Psychology at North Dakota State University. Her research primarily focuses on disordered eating, suicidal behavior, and related topics. She started Jedi Counsel with the hopes that it would serve as a fun and interesting way to discuss the
importance of mental health issues. Her favorite fictional characters are Buffy the Vampire Slayer and Wonder Woman.