Looking for extra emotional support? Visit our Safe Space.
May 23, 2016  — Categorized in: Latest Blog from Vibrant 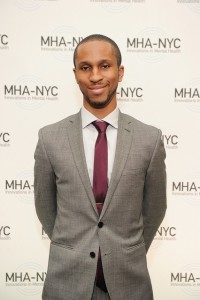 That’s never what I thought I’d be.

I was born and raised in Harlem. My father gone before I was born, my older brother gone by the time I was 6, and my mother a devout Christian. I grew up going to Christian meetings three days a week, preaching on Saturdays, and allowed out only with a select handful of friends. To anyone looking in, I seemed to be handling things fine. But I wasn’t.

At home, I learned to be poised, polite, polished, and articulate. I learned to dull the sound of my pounding heartbeat while talking to a congregation of people. Because I had to. At school, though, I learned slang, curses, and “inappropriate” songs. I hung out with regular kids. I was leading a successful double life before I was 12. Wearing fake smiles before I knew what fake was.

In middle school, the cracks started to show. My father came back into my life, taking me on bi-weekend visits to his house. I felt like myself and hated going back to school after those weekends.

And, since I was getting older, the responsibilities were mounting. People talked about my future. I “had potential.” I was “on the right track.” Where did I want to take this? My life felt totally out of my control. So, I started my decline.

I began failing classes, skipping school, getting in trouble. I got suspended for carrying a knife I had stolen. I spent as little time at home and school as I could, hanging on the streets or with friends. My teachers didn’t understand. I had “so much potential.” It was so obvious that I was trying to take my life back, but no one could see.

Then we moved to where my Grandmother lived in Jamaica, Queens. I felt cut off from everything and I hated it. I got in more trouble. I even got arrested for assaulting a boy in school who I heard was talking behind my back. So stupid.

High school made things worse. Adults said it was pivotal but never told me how to manage it. And warnings without advice just became anxiety. I had bouts of rage — punching walls, breaking objects, yelling. I started smoking weed and cigarettes and drinking. I developed a very short fuse and a lower than low tolerance for everything. I was boiling with anguish and angst.

Things reached a breaking point when my mother took away my ipod. I could always find solace in music, and my ipod had been the glue to my broken psyche. My mom had no idea. I grabbed a butcher knife and started threatening her life and mine. She said she would call the police, I said, “One of us would be dead before they got here.” She told me I needed help.

Help. Help takes time. Time is an escape. Maybe I could even get some medication out of it. I immediately checked myself into the hospital under suicide watch. After three days, I was transferred to a psych ward, but in 3 more days I was out again. Things were a little better for a short time, but nothing really changed.

I fell into a deep depression. My best friend transferring schools made it deeper. My school therapist leaving made it even harder. My 9-year-old nephew’s death solidified it. I was done fighting. I just wanted to do nothing.

I all but dropped out of school to stay home, sleep, and eat. I figured someday I spent a lot of time with my friend Alex, a 17-year-old freshman. At school they told me I was going nowhere. I’d be nothing. I stopped showing up.

It was when Alex suggested I check out a GED program he’d found that things FINALLY started to change. This kid didn’t stay in school for anything so I was definitely interested. It was MHA’s Queens Adolescent Skill Center. I came, I saw, I talked. That was July, 2013. 18 years old, I enrolled myself.

As much as I hate clichés, here it goes. The Queens ASC honestly changed my life. I found a family there. I got answers from adults who empathized with me — I loved it. I got on track to get my GED and did well. So well the staff said I didn’t even have to come every day. Best. School. Ever.

After only 3 months, I took my GED and did great. I thought that was the end, but then I learned about their vocational program. That conversation went something like this:

I would get paid to come to school and tutor?! Again: Best. School. EVER.

Home was still bad but it was different now. I didn’t feed into it because I was focused on working.

When I was eventually kicked out of my house, my ASC site director, the reputable Carleton Archer, offered me a Youth Advocate internship at the Manhattan ASC so I could earn some more money. More hours AND a chance to speak to and for those who didn’t feel like they had a choice? I jumped at it.

Last February, the ASC helped me get a third job, this time at a GameStop. It’s my first retail job and I’m already in line for a promotion to supervisor. Working there and as a Youth Advocate with Archer now at the Bronx ASC , I’m proud to say, I’ve come a long way from just a kid with wasted potential.

In just 2 and a half years, I have enrolled myself in school, took and passed my GED, maintained 2 internships, competed for and maintained a job with a major establishment, sustained much of my own living, and moved up in a career path that I want to be in.

My relationship with my boss went from youth and director, to mentor and mentee.

I’ve grown from student to intern to employee.

I’ve gone from not knowing what I want to do, to talking about colleges where I can further my career.

The MHA has been there every step of the way furthering my progress. Helping me use that latent potential people kept going on about.

I’ve evolved from nothing to a success story.

That’s something I never thought I’d be.