Working for Wellness and Beyond: Maurice’s Story 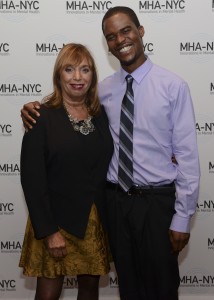 Maurice was diagnosed with bi-polar disorder at 12 years old. After being connected to MHA-NYC and learning how its direct services can help him gain control of his mental illness, Maurice is on his way to recovery and is sure that he has a bright future.

“Like many others affected by mental illness, the fragmented mental health care system failed me,” said Maurice, 24. At age 13, Maurice was kicked out of the school system and administrators told his mother that he needed something more ‘intense’ to better solve his behavioral problems. For the next 4 years, he was in and out of treatment facilities and taken off of medication completely. As time and his mental illness progressed, Maurice became homeless and began to heavily self-medicate to cope with his disorder.

“My life spun out of control,” he said. “It became a drug-addicted lifestyle and my Bipolar Disorder intensified. By the time I found help at MHA-NYC’s Family Resource Center, I was a complete mess.”

Maurice’s mother, who also suffers from mental illness, was introduced to MHA-NYC’s Family Resource Center, or FRC for short, where she received guidance on how to navigate the complex child service system. Maurice found comfort and learned to trust again when he was introduced to his FRC Case Worker, Hilda. After learning more about Maurice’s long-term goals, she connected Maurice to MHA-NYC’s Recovery Works, a transitional housing program that helps people who are living with mental illness and substance use disorder move from shelters and hospitals back into the community.

Maurice has accomplished so much through MHA-NYC’s direct services. He has a safe place to live; he is taking medication for his bi-polar disorder; he is clean; and more importantly, Maurice is emotionally and mentally healthy, and further along the road to recovery than ever before.

Watch Maurice give a heart-felt speech at MHA-NYC’s 2014 Annual Gala: Working for Wellness and Beyond and hear more about his goals to go to college and become a psychiatrist.