Looking for extra emotional support? Visit our Safe Space.
May 1, 2014  — Categorized in: Latest Blog from Vibrant 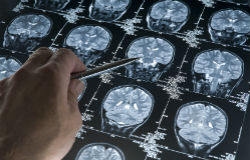 A recent study published in the American Journal of Psychiatry suggests that head injuries, such as a concussion or skull fracture can increase someone’s risk of developing schizophrenia, bipolar disorder and depression by up to 439%. This is the largest study to date documenting the link between traumatic brain injury (TBI) and mental illness.

Using the Danish National Hospital Registry, the study followed 1.4 million people between 1977 and 2000. During this time, 113,906 people were admitted to a hospital with a head injury. Of those people, 4% were subsequently diagnosed with a psychiatric disorder. The study suggests that the likelihood of developing a mental illness as a result of a head injury was highest between the ages of 11 and 15.

For years scientists have suspected a strong link between head trauma and certain mental illnesses. However, previous studies haven’t addressed whether someone with a mental illness is more likely to sustain a head injury or whether it’s the injury itself that causes the illness. To tackle what has been called a “chicken-and-egg” situation, the researchers compared those who had been admitted to the emergency room for injuries such as a broken arm or toe and examined their likelihood of developing a mental disorder. The results suggested it was significantly lower than those who had sustained head injuries. The researchers also found that the risk of developing a mental illness was the same regardless of a family history.

While there are no definitive answers on why head injuries seem to increase the risk for mental illness, researchers suggest that damage in particular areas of the brain can lead to the development of an illness associated with the region in question. For instance, according to the National Institute of Mental Health, trauma to the anterior cingulate cortex has been linked to disorders such as attention deficit hyperactivity disorder, schizophrenia, and depression.

The Center for Disease Control states that TBI ranges from brief loss of consciousness to extended period of unconsciousness or memory loss, is a major cause of death and disability. In 2010, about 2.5 million emergency department visits, hospitalizations, or deaths were associated with TBI in the United States. While traumatic brain injuries are common, lack of outward physical signs make diagnosing them difficult.