#WriteOnSarah: When Labor is the Scariest Day of Your Life – The NICU and PTSD

Sarah Vander Schaaff is a writer, blogger and a mother of two from New Jersey, who has struggled with Obsessive-compulsive disorder for as long as she can remember. Her courageous column in the Washington Post (“Obsessive –compulsive disorder nearly ruined her life”, January 4th) received international attention for its honesty and openness. This is the first blog in a regular series for Sarah who will write about the mental health challenges we all face in day to day life.

PTSD is described as a “disorder that develops in some people who have experienced a shocking, scary, or dangerous event.”

This month, as we look at PTSD, I wanted to include the trauma and recovery that is part of motherhood, especially for women who experience premature labor or have a high-risk pregnancy and delivery.

This is a first-person account of Melissa, whose twins were born on December 2, 2011. Their due date was March 14.

“Yesterday, I found myself arguing before the superintendent of special education, asking the district to acknowledge its inability to meet my four-year-old daughter’s needs, and approve a change in her placement to a private school.  My voice cracked, my pulse raced, and my heart went into my throat as I spoke about wishing that my daughter didn’t have special needs. And in that instant, I found myself, yet again, reliving the day my twins were born.

I had a perfect pregnancy until 25 weeks and two days. Then, my twins made themselves known to the world.

I hadn’t felt well and went to the hospital late on a Thursday night. The next morning, after having been assured that I was “not in labor, ” a series of doctors were paraded into my room to tell me the chances of my twins’ survival if they were delivered that day.  With each new doctor, my anxiety increased and my insistence that I was not going to deliver grew in intensity.

I was left alone in a large, sterile room when suddenly I felt fluid trickle down my leg. I started to scream for help, panicked and scared to death. The physician walked in calmly and said, “Well, your membrane may have ruptured.”

“My membrane may have ruptured?”

It sounded awful.  What did that mean? I want from panicked to out-of-my-mind in the blink of his eye.  Why he couldn’t have said, ‘your water may have broken’ is beyond me.  He told me that even if my membrane had ruptured, that I was still unlikely to deliver any time soon since it did not appear that I was in labor.

I will never forget the sickly, shocked look on his face when after his examination he announced that I had dilated to 8cm in 30 minutes and that my twins were going to be delivered “now.”

I sat straight up and told the room in total seriousness that I had no names picked out and so they could not deliver them.

Why was no one listening to me? Why were they pulling the rings off my hands and my watch from my wrist? Why did they whisk away my husband and usher out my best friends? What about all those cold statistics the doctors had told me earlier about their chance of survival? This was NOT happening to me.

But it did happen.

I never saw Asher.  His team of neonatal doctors and nurses immediately took him to the NICU.  Abagail was in the palm of the hand of a physician. He told me I had a daughter. And then, she too, was gone before my eyes.

My husband, a former Marine, went into fight mode.  He put on his flak jacket and retreated to his safe space of emotional isolation from which he stayed perched with sniper-like perfection, leaving me as the collateral damage in this battle we had just lost, while we struggled to win the NICU war.

Those first few days were surreal, yet I remember everything. Everything. Like it happened yesterday: from the statement that I would deliver my twins momentarily, to learning I had a son and then a daughter, to hearing that my daughter had a two percent chance to survive, to learning that she suffered from a devastating brain bleed. 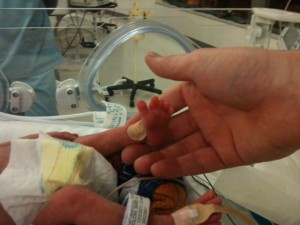 Every time the phone rang during the 113 days before both babies were home, I would fall to the floor for support while I waited to hear if it was the NICU calling with bad news.  Every time I saw a largely pregnant woman I would stare, or glare, as my husband put it, wondering what I had done wrong that prevented my twins from staying safe inside my womb.  Even today, when my daughter struggles to do what most of us take for granted, I am back in that delivery room thinking back to the Worst Day of My Life.

It was the realization that I still think of their birth-day as the “worst day of my life” that made me understand that I had work to do to change my way of thinking. I did not want my children burdened with my own trauma.

I can’t rewrite history, but I wanted to change my mantra, my recollection of that day, to more accurately acknowledge what it meant to me: it was the scariest day of my life.

With this new goal, I sought counseling. That is when I was first diagnosed with PTSD.

Somehow being told that everything I was feeling- all the guilt, all the fear, all the jealousy- was normal, given what I had been through, freed me.

I still have trouble going to baby showers and being with-all-my-heart happy when friends have healthy deliveries.  I still wince around roundly pregnant women, and I still have to leave the room when I hear people talk about wishing their pregnancies were just over already due to their physical discomfort.  My heart still stops every time my daughter cries for a reason I cannot discern and my heart breaks a bit each time she struggles to do something that comes so easily to her twin brother.

But my daughter is the strongest warrior I have ever met, so for her, PTSD or not, I will always soldier-on.”

As MHA-NYC CEO and President Giselle Stolper wrote this month: “…it is vital that we focus on the positive ways we can help – and improve outcomes. Reach out, be a good listener and support anyone you suspect might be suffering from PTSD or any mental health issue.”

Please share your stories, comments, and ideas for future posts. I’d love to hear from you. I can be reached at writeonsarah@dev-mha-vibrant.pantheonsite.io.