#WriteOnSarah: Cracked, but Not Broken: 5 Lessons from Kevin Hines 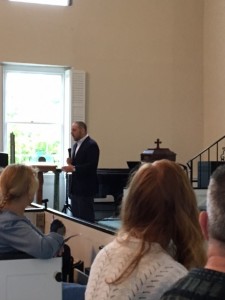 Suicide prevention does not take a break now that it’s “Depression Awareness Month.” In fact, as mental health advocate Kevin Hines reminds us, there are thousands of reasons to think of suicide prevention in the context of depression. It was depression, and other symptoms of bipolar disorder including paranoia and mania, that led Hines to believe he had to take his own life by jumping off the Golden Gate Bridge. He felt a suffering in his mind so great that he believed he had no worth or value.

But attempting to take his own life was a seventy-five-mile-an-hour fall he regretted the moment he felt the wind cut across his face.

This Saturday, I heard Hines captivate an audience brought together by my local NAMI chapter. He emphasized a theme articulated in his book, Cracked, Not Broken. “Even with bipolar disorder, if I had followed my treatment plan, I would most likely not have attempted suicide. Get on track with a treatment plan now. Follow it 100 percent. Do not wait in denial.”

Not for Hines, or any of us who have mental illness.

After his talk, I met with a group of students from high school, college, and graduate school to talk about the key points we wanted to take back into our own communities. I was impressed by this group of young people: college students who are actively keeping mental health a priority on campus; high school students who want to change the conversation in their own school; and seminary students who realize the interconnectedness of faith and mental health.

Here are five ideas that resonated powerfully with our group. They pertain not only to suicide prevention but also to the larger topic of mental illness:

Hines said stigma is a polite term for a much more straightforward action: discrimination. In the psych ward there are no “get well” cards. Do we treat individuals or families going through a mental health crisis with the same compassion and love we give those with physical illness?

The students agreed that the word “discrimination” more accurately described the way in which those with mental illness are treated.

Whatever we call it, it seems we have not yet found the right way to talk about mental illness. Hines used the phrase brain disease because it better speaks to the idea that his condition can be managed but not cured; it is part of his life 24/7 and 365 days of the year.

Hines was diagnosed with bipolar disorder at 17. If he’s honest, he said, he began to hear voices in his head in fourth grade. And without fail, he said, a student will come up to him after each speech he gives in a school to say, “I have this disease but my parents don’t believe it’s real.”

A few students in our talk-back group discussed the decision their parents made to take them to therapy. It can be a big step, and it might require seeing more than one doctor until the right one is found.

Hines described his own father’s reaction to some of his early symptoms, exasperated by his son’s sensitivity and crying.

“Well, get un-sensitive!” he used to demand. Eventually, his father was one of his strongest supporters, but he, like many of us, wished the symptoms of mental illness could be controlled by will power alone.

4. Talking helps others reach out.

The students in my talk-back group shared a valuable tip: just mentioning that they were part of a “mental health org” when giving introductions or meeting new peers, became an invitation to those seeking help to talk to them. Talking about therapy or mentioning how much better they felt having gone, was also a positive way to create a safe space to talk with peers. But it wasn’t enough to be the shoulder to lean on. The students realized the limitations of their own abilities, and the feeling that stress builds upon stress in an academic environment. The best solution might be to say: “I am going to help you get an appointment with CAPS, (Counseling and Psychological Services).”

The students readily embraced this message.

Hines, as his book title suggests, is cracked, but not broken. His path has meant overcoming the denial of his diagnosis of bipolar disorder, learning from a second suicide attempt, and 3 involuntary and 4 voluntary hospitalizations under suicide watch.

And it involves a strict regimen. This structure is what gives him support and removing it when he is “feeling better” is like pulling the legs from beneath a table.

And he talks about his mental illness, or brain disease, with groups all over the world.

I would love to hear from you. Please leave a comment, or post a topic you’d like me to address this month as we look more closely at coping with depression. You can also email me at writeonsarah@dev-mha-vibrant.pantheonsite.io.